Isn’t that what January is all about? Have you been purging and finishing up this month? This post has been on my mind for weeks and now I am in a rush to write  it before the end of the month, or the title just won’t have the same impact, lol!  One of the first quilts I blogged about went to its forever home. I delivered it to my oldest daughter in November on a visit to Alberta.  She had her eye on it for a while. I hope she thinks of me when she curls up under it.

Belle, my granddog enjoyed pawing the quilt after the  photo session.

This past summer I was invited to a quilt retreat by my friend Kathy — lucky me!  It was during that week I started a new version of this quilt. I added  a grey edge to the white fabric and changed the way it was constructed. My plan is to offer it as a  workshop.  I stitched like a crazy woman and finished more than 200 blocks. Except the white and grey all the fabric is old stash. The photo on the left  is on the design wall at the retreat in diamond  blocks and on the right the blocks have been stitched together on my studio wall.   More on the retreat at a  later!

While sewing  the diamonds together I thought up a better/easier way to make this quilt, I discovered the reason for not thinking of it sooner as I  scrolled thru the retreat pictures . TOO MUCH FUN AT THE RETREAT!

This site uses Akismet to reduce spam. Learn how your comment data is processed. 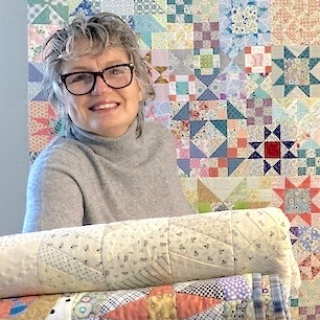 With a lifelong interest in all things needle and thread, I found my passion when I discovered quilting. I love all things quilty; teaching, designing and longarm quilting.